Handcrafts Unlimited resides in a lovely historic, creaky, character-filled space across the street from the Williamson County courthouse on the Square in Georgetown, Texas

CHECK OUT THE VIDEO 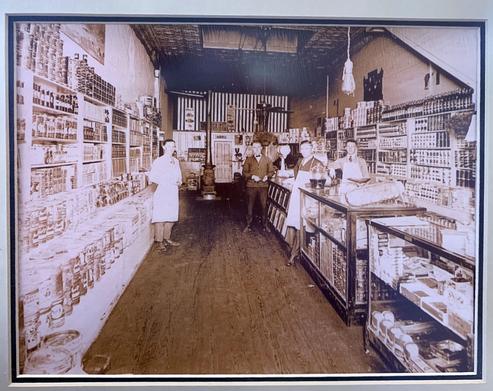 We are now OFFICIAL. 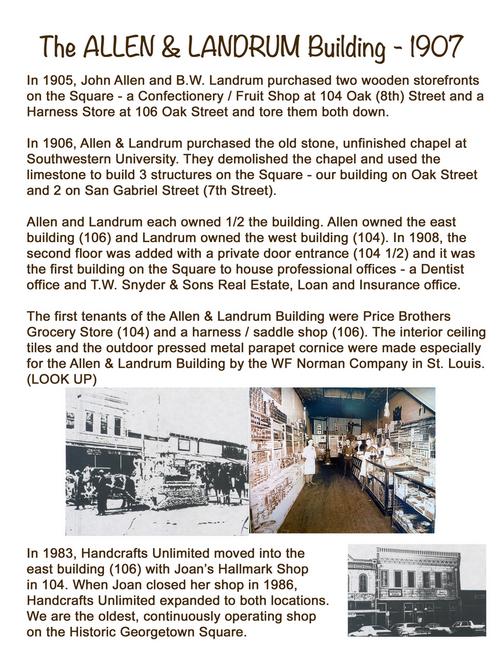 ​Handcrafts Unlimited resides in a lovely historic, creaky, character-filled space across the street from the Williamson County courthouse on the Square in Georgetown, Texas.

The building that we know and love today was originally two wood-frame buildings constructed in 1885 on a stretch of 8th Street that was at that time known as Oak Street, and from 1885-1905 housed such businesses as a grocery store, cigar shop, millinery/dress maker, a bookstore, harness shop and a confectionary. There was an east side and a west side, with one side owned by T.W. Marrs and the other by D.S. Chessher. During different times over the years, the building has been known as the Allen Building, the Landrum Building, and the Booty Building.

The present day building is known as the Allen & Landrum Building, and was under construction from about 1907-1910. This prominent limestone commercial building was constructed using limestone from the Southwestern University's Chapel, which Allen and Landrum purchased in 1907. Workers torn down the Chapel and also tore down the wooden building at 104 and 106 Oak Street (now 8th Street). In 1907 construction started on the 2 building with help from a stone wall from the Stone Drug Store next door. A pressed metal cornice with details identical to those found on Davidson’s Grocery crowns the front façade.  In 1908 the second floor was added with the staircase placed in the center.

The building was completely restored in 1983 with the second floor converted to a townhouse for the building’s new owner, Jo Ella Simon Broussard. In 1986 she wrote:

“1908 – An upstairs, second floor was added with the stairs placed in the center. During this total addition and renovation the metal parapet across the outside top of the building was made by the W.F. Norman Company (St. Louis, MO) especially for the Booty Building. It was Mr. Booty, who owned other properties and land, who oversaw the addition making it the first building on the Square to house professional offices on the 2ndfloor. The handrail, bannister, woodwork, transoms, double sliding doors are all original and in their places. Dentists, attorneys, CPA’s, a small medical clinic, and even some rooms were used for lodging. This continued until the late 1940’s or early ‘50’s when the building began to need repair and gradually became vacant.

In March, 1983 the downstairs housed a beauty shop and a jewelry shop. The upstairs rooms were used for storage and housing for rats and bats. In fact when I first saw the building…..we had to walk over dead bats on the stairs to get to the 2ndfloor to find many others, all sorts of water leaks, no running water or electricity, rotted and rusted pipes. But the wide gracious hallway, the beautiful woodwork, the heart pine floors, and high ceilings all evidenced a grand beauty behind the trash, filth and run-down condition. I fell in love with it and put an earnest money contract on it that day, contingent on a structural engineer’s examination of the property. Also, above the dropped ceilings on the first floor I had been able to climb up and see the beautiful pressed metal ceilings.

Restoration began June, 1983 and we worked long and hard for five months with many crews. We were able to occupy the upstairs, now called Booty Hall, by November 1983. Both 1stfloor stores [one being Handcrafts Unlimited] were open by December 1983. In the restoration it was learned that the entrances had originally been recessed. In order to have living quarters on the 2ndfloor, the light well from the roof to the 1stfloor had to be closed in with a one hour fire wall. It was also in disrepair. The sunroom and south bedroom we added to the upstairs where there had been a covered porch area. The opening into these rooms are where doors and windows had originally been. The tulips glass in the sunroom was mine. The transom over the sliding doors was made from a broken (cracked) glass on one of the 1stfloor entry doors. It was decided to put baths in areas that had been small rooms off the main hall and the other between two larger rooms. Part of the wall in the rear hallway was removed to make a large living area. The original wall line can still be seen at the ceiling. Doors that were removed here were used for the added rear bedroom. Bookcases in the front library were added. Ceilings on the 1stfloor that were in good shape were all taken down to be treated against rust, others were replaced by the W.F. Norman Co. in St. Louis who made new panels where necessary. All new wiring and plumbing and the firewall were installed while the ceilings were down.

The Booty Building (although wrongly named) was listed on the National Register of Historic Places in 1984.

While the detail in Ms. Broussard’s account focused greatly on the 2nd floor restoration, it is impressive to note the condition of the bulding when she first saw it and fell in love with it, the beauty and potential she saw even in its dilapidated state. If only HGTV had been around back then to show the transformation!! And if only walls could talk!

In recent years, the building was bought by Eric Visser, and the 2nd floor townhouse was converted to office space for Russ Phillips Team|Keller Williams Real Estate. The entire 1st floor remains home to Handcrafts Unlimited. 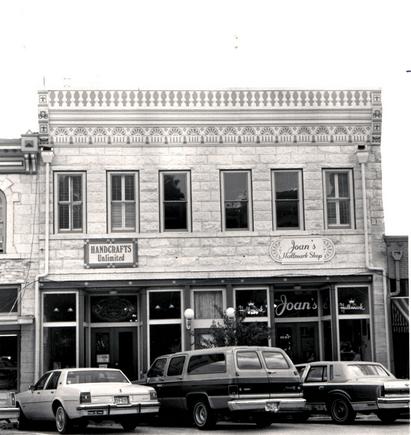 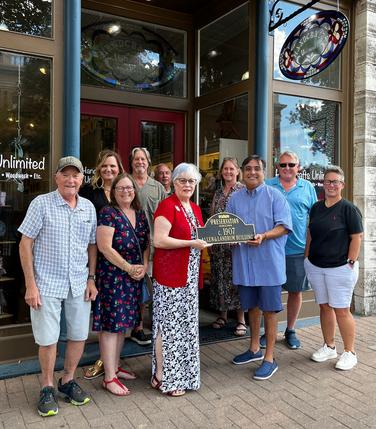 A Nod to the Past - The Allen & Landrum Building 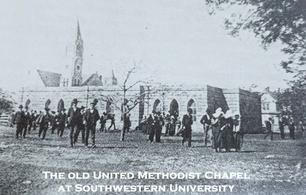 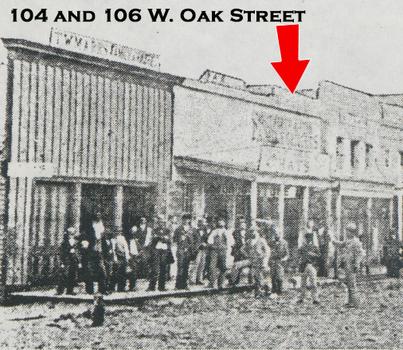